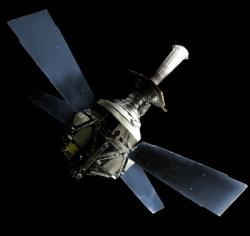 It was recently reported by NewScientist that Gravity Probe B received an “F” from the U.S. Government and the project would receive no more funding.

I don’t know whether to laugh or cry. Here’s why:

Our government (you and me) spent over $850 million on GP-B, a joint NASA and Stanford project. This was far more than the original budget. In theory the project was simple; put a telescope into space, attach it to some gyros and point it at a nearby guide star. The motion picked up by the gyros was supposed to confirm Einstein’s theory of relativity (that the mass of the earth bends space time) and reveal the exact amount of the relativistic effect.

Over the last decade the GP-B team built the finest gyros known to man, put them in a spacecraft cooled to almost absolute zero, and sent it into a polar orbit far above all the noise of a so-called wobbling earth. In a carefully controlled experiment, whereby the telescope was set to meticulously track the guide star (one with minimal proper motion), they picked up some amazing information – potentially a huge discovery – but it was not what they were looking for.

In order to find the relativistic effect, the GP-B team assumed they only had to cancel out two signals or unwanted motions. First, was the motion of the spacecraft in a polar orbit around the earth. This motion resulted in an aberration between the telescope and the guide star of about 5.1856 arc seconds per orbit. Since that orbit took place every 91 minutes it was an easy signal to spot and remove. The second was the earth’s orbit around the sun, which results in an aberration of 20.4958 arc seconds per year (relative to the guide star). Only one and a half of these orbits took place during the 17 month experiment period so it was harder to find, but it is a motion so well known, that it was also easy to confirm and cancel out. It was assumed that there were no other meaningful celestial motions to cancel, so if the equipment worked right, the only signal left would be the relativistic effect.

There was however another assumption made that now appears to be a potentially huge mistake. That is that the solar system only moves about .005 arc seconds per year. This assumes that the only motion of the solar system is once around the galaxy approximately every 240 million years. The thinking was that this aberration is so small it would not affect the outcome of the experiment. But after netting out the spacecraft and earth orbit motions the remaining signal was far larger than anyone expected. In fact, it is so large it either means there is some unforeseen problem with the gyros or that our sun is part of a binary star system.

Yes, that’s right, if the data is correct our solar system is curving through space (carrying the earth and spacecraft with it of course) so rapidly that the only way to explain it is if our sun is gravitationally bound to another nearby star. When I met with the GP-B team at Stanford last fall they were still in the early process of analyzing the data but openly discussed the idea of an unknown companion to our sun, including the possibility of a not too distant blackhole.

This is by no means the consensus opinion. In fact, most of those analyzing the data suspect the wacky signals are the result of imperfections on the gyros, polhode motion or some other inexplicable anomaly. But given the fact that that the gyros were specifically designed to avoid these types of problems, and were checked by hundreds of scientists before launch, and that the experiment is fairly simple at its core, serious consideration should be given to the idea that the unwanted GP-B signal, deemed to be “noise”, is in fact the signal of a solar system in motion.

A moving solar system model has been the basis of our work here at the Binary Research Institute for the last six years. From this model we have made a number of observations and predications. One is that the observable, commonly known as the precession of the equinox, is principally due to the moving solar system rather than local luni-solar forces (which do produce nutation but very little of the 50 arc seconds of annual earth reorientation). Another is the accelerating precession rate, which has been occurring steadily since Newcomb first provided a formula for the precession constant (which he underestimated and we modified with Kepler’s Laws). Long before the GP-B data was received we wrote Stanford and told them to expect some wacky signals that would appear to mimic precession. One of the subsequent public releases has stated that the signals received do indeed appear to “mimic” the very signals the spacecraft was trying to avoid with its perfect gyros placed far above a so-called wobbling earth.

At this point no one knows quite what to think. Is there something wrong with “the world’s finest gyros ever built” or is our solar system gravitationally bound to some nearby mass? Time will tell.

In the meantime, I can understand the government wanting to shutdown a project that has produced nothing but cost overruns and unexpected results. On the other hand, if the GP-B team is willing to explore novel ideas related to the unwanted signal, they just might discover something even more important than the fifth digit of the relativistic effect, that is, our solar system moves!